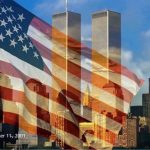 It was February of 2006 and the northeast had just had a record-breaking snowstorm.  We had just finished a speaking engagement at the Norma F. Pfriem Breast Care Center in Bridgeport, Connecticut.  Flying in and out of LaGuardia airport in New York, it just seemed a no-brainer that we stay over a couple of days to experience New York City for the first time.  We were shivering like crazy as we boarded the tour bus.  We sucked it up and snuggled close wanting to sit on the top deck for an unobstructed view (these tourists didn’t want to miss a thing).

About half-way through our excursion, the tour guide pointed in the direction of where the World Trade Center had been and told us if we wanted to get off and pay our respects we could catch the next bus coming through.  So my husband, Jerry, and I got off the bus.  We had to see this place that we had only seen on TV.  The place where evil attacked our nation, broke our hearts and changed us forever.

At that time it was a deep hole with a cyclone fence around it.  Fastened to the fence were photos, the names of those whose lives were taken as well as the names of the heroes who gave their lives trying to save them.  There was a sign on the fence, a timeline detailing the horrors of that day.  It was a solemn place, eerily quiet in spite of many tourists and New Yorkers paying their respects and men with heavy machinery working on the site.

We walked around to see as much as we could, then went across the street to a hotel to escape the cold and thaw out with something warm to drink.  While we wrapped our cold hands around our hot coffee we had a full panoramic view of the devastating hole that was once two great buildings with a commanding presence.  We tried to imagine what it must have been like for those who were working in the restaurant that morning as well as the patrons having their breakfast.  We imagined the wonderful smell of bacon and eggs, business deals being made with the sound of clanking dishes and laughter in the background.  Others gazing out the window, lost in their own thoughts on that beautiful crisp sunny morning.  All unaware that something terrifying and unimaginable would intrude on their morning, their lives.  That they would go from shock to bewilderment to anger when they came to understand that they had witnessed unspeakable evil up close and personal.

It was Valentine’s Day and we had dinner reservations at Patsy’s Italian Restaurant.  We realized we would never be able to make it if we waited for the next tour bus to come by, so we asked a young man who appeared to work at the hotel to hail us a cab.  An unmarked town car swung around stopped in front of us and the young man held the door for us as we climbed in.  As we buckled up I noticed the lining on the door was torn and the cab didn’t look too official on the inside.  The driver was an elderly man with an accent; his fingers were terribly twisted with arthritis so he held the steering wheel between his knuckles.

I started to argue with myself.  “Yikes! What should we do?  I know!  We can make an excuse and get out of the car!  I’m sorry Sir; we really need to exit your vehicle and buy some gum, yeah we really need some Chiclets!  No! He’d never fall for that it’s too obvious and would hurt his feelings”.  Before I had a chance to finish this big fight in my head the cab was in motion.  So I grabbed my husband’s hand, held on tight, and shot up a silent prayer, “Lord, please protect us, we’re just a couple of naïve tourists.  If ya don’t, well I guess we’ll see you in a minute!”

My husband teases me because I believe everyone has a fascinating story and I feel the need to know it.

I began to interview our driver.  He told us he was from Argentina, his father worked as a cook for General Dwight D. Eisenhower during WW2.  I then asked him if he was on duty on September 11th.  He replied, “Oh yes my darling!” with his twisted knuckles he tipped his cap and said, “God Bless America!”  Then he began to tell his story.

Every weekday he picked up a woman and drove her to the hotel where she worked, the same hotel where he picked us up. On their way to the hotel, they wondered why there was smoke billowing into the sky, as they got closer they saw the plane hit the second tower, they saw people falling.  His voice quivered, he took his cap off again and with tears in his eyes repeated, “God Bless America!”

Another big fight began in my head.  “Sherry Lynn, stop talking!  You just need to learn to be quiet.  Your curiosity is bringing pain to this precious man.  You are not, and will never be Oprah!”

I took my advice and remained quiet the rest of the ride to the hotel.  It was like my question opened the floodgates of his heart.  He was bewildered and angered that anyone would harm, and not appreciate, this great nation that he loved so dearly.

He then told us that after 9/11 he was driving his taxi and saw a man on the street holding a sign cursing the USA.  Furious, he stopped, got out of his cab, and demanded to know where the protester was from, the man told him, and then our cab driver asked him how much money he had in his pocket when he arrived in the USA.  The man said, $40.00; our cab driver pulled out his wallet threw some money in his face and said, “If you don’t love and respect this country, get the hell out!  Go back where you came from!”  After telling this story, he again took his crooked fingers, lifted his cap with his knuckles, and said, “God Bless America!”

As he dropped us off at our hotel, I thanked him for sharing his story with us.  “You are welcome my darling!” he replied.

Jerry and I made it back to our hotel in time to gussy up and take a more “legitimate” taxi to our Valentine Dinner at Patsy’s.  During dinner we agreed that our ride with this amazing patriot of the United States of America, our little renegade taxi driver, was an amazing adventure; a blessing we would never have wanted to miss and will never forget!  God Bless America!